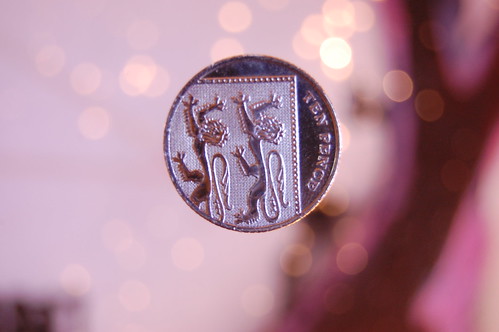 by  Free for Commercial Use  VIA FreeForCommercialUse.org

A British Ten Pence piece with a bokeh behind it

The British decimal ten pence (10p) coin – often pronounced ten pee – is a unit of currency equalling ten one-hundredths of a pound sterling. Its obverse has featured the profile of Queen Elizabeth II since the coin’s introduction in 1968, replacing the two shilling coin in preparation for decimalisation in 1971.[1] Three different portraits of the Queen have been used on the coin, with the latest design by Ian Rank-Broadley being introduced in 1998. The second and current reverse, featuring a segment of the Royal Shield, was introduced in 2008.

Five pence and ten pence coins are legal tender only up to the sum of £5; this means that it is permissible to refuse payment of sums greater than this amount in 5p and 10p coins in order to settle a debt.[2]

The ten pence coin was originally minted from cupro-nickel (75% Cu, 25% Ni), but since 2012 it has been minted in nickel-plated steel due to the increasing price of metal. From January 2013 the Royal Mint began a programme to gradually remove the previous cupro-nickel coins from circulation with replacement by the nickel-plated steel versions. This will have the side effect of leaving only one circulating reverse and obverse combination (see design section below).[3]

FFCU image curated by Free For Commercial Use

Free For Commercial Use Images of Money